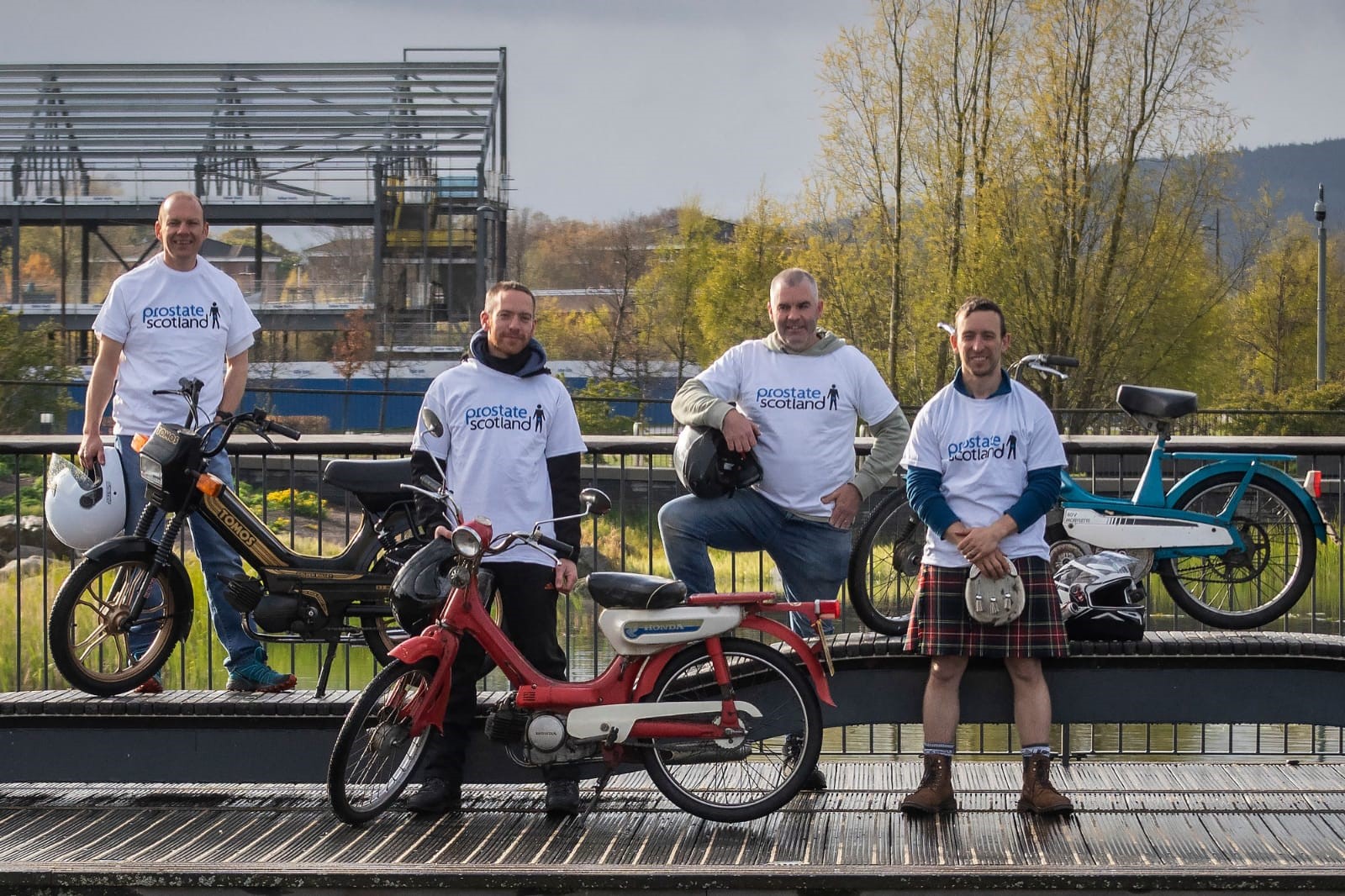 Scooter enthusiasts and charity supporters Kevin Kilgour and team will set off today for #TheDREAMTour challenge to raise funds in aid of Prostate Scotland.  We were delighted to see the team featured on the front page of this week’s Highland News and today in The Inverness Courier.

The event will see Kevin, Kenny, Alasdair and Ed race from Inverness on old reconditioned 50cc scooters in a ‘Top Gear’ style challenge. Taking place in three stages, the friends will race to the Old Man of Storr in Stage 1.  The Stage 2 route will cover the Old Man of Storr to Glenelg and Stage 3 will take them from Glenelg to Inverness.  They set off today with friend Martin accompanying them as support driver.  The team will pitch tents for their overnight stays and return on Sunday 16 May.

The friends began buying the old scooters in November, mostly from online auction sites. The first part of their charity challenge was to find vehicles with engines of 50cc or less, and over the winter they have worked hard to recondition them in readiness for their race.  The team will be racing on a 1984 Tomos, 1990 Tomos Golden Bullet, 1977 Mobylette 40V and a 1973 Honda PC50.  The final line-up of scooters has a combined age of 160 years!

To add extra elements to the challenge for each competitor, points will be given during the event for various categories including Expenditure, Style, and Overall Public Popularity “of the mopeds not riders!” said Kevin, “and negative points will be awarded for breakdowns.”  He added “the purpose of the event is to have a laugh, lighten the mood, improve mental health in the current times, and raise funds for a worthwhile cause.”

As well as fundraising online in aid of our work at https://www.justgiving.com/fundraising/the-dream-tour the friends have also been documenting their preparations and raising awareness of our cause on their Facebook page ‘The DREAM Tour’ and with videos on YouTube.

Morag Idan, Communications & Supporter Care Officer, Prostate Scotland said “We’d like to say a big thank you to Kevin, Kenny, Alasdair, Ed and Martin for their fantastic initiative and efforts in setting up The DREAM Tour challenge.   Their tremendous support and fundraising are vital in supporting our work to tackle prostate cancer and disease.  We’d also like to thank all those who have contributed to the DREAM Tour venture.  Their support helps us spread the word about the importance of prostate awareness in their community, and also spread the word about our new COMPASS support services available to men with prostate cancer living in the Highlands.  We’ve teamed up with Maggie’s Highlands to offer appointments with a Cancer Support Specialist free of charge; and our Living Well with Prostate Cancer Course starts on 26 May.  We’ve been able to support several men, and their families, in the area.  We’d like to help many more.”

Prostate Scotland was set up in 2006 as a Scottish charity to develop awareness of prostate disease, to support men and their families/ partners with the disease through providing advice and information and to advance treatment and research into prostate disease.

Its aim is to reach out across Scotland to create greater awareness amongst men and their families/partners about prostate disease and to advance treatment.

In 2010 the charity won a national award for its impact on community health and in 2013 and 2015 was commended in the British Medical Association Patient information Awards.  In 2017, the Prostate Scotland website was rated as being one of the top 50 best prostate cancer websites in the world out of several thousand by independent website reviewer Feedspot.   Prostate Scotland was awarded Health Charity of the Year in November 2017 in the Charity Champions Awards 2017. Prostate Scotland is a registered Scottish charity No.SC037494

Prostate cancer is the most common cancer amongst men in Scotland, with a lifetime chance of one in ten men developing it[i].

Prostate Scotland is currently developing a range of support and wellbeing services to help men across Scotland navigate prostate cancer and disease.  It is called our COMPASS project.

As part of COMPASS, last August we launched a support service for men who’ve recently been diagnosed with prostate cancer living in the Highlands.  We’ve teamed up with Maggie’s Highlands to offer appointments with a Cancer Support Specialist free of charge.  Men can also join a free online Living Well with Prostate Cancer Course, which will be run by Maggie’s Highlands each week from 26 May.  More information is at https://www.prostatescotland.org.uk/help-and-support-for-you