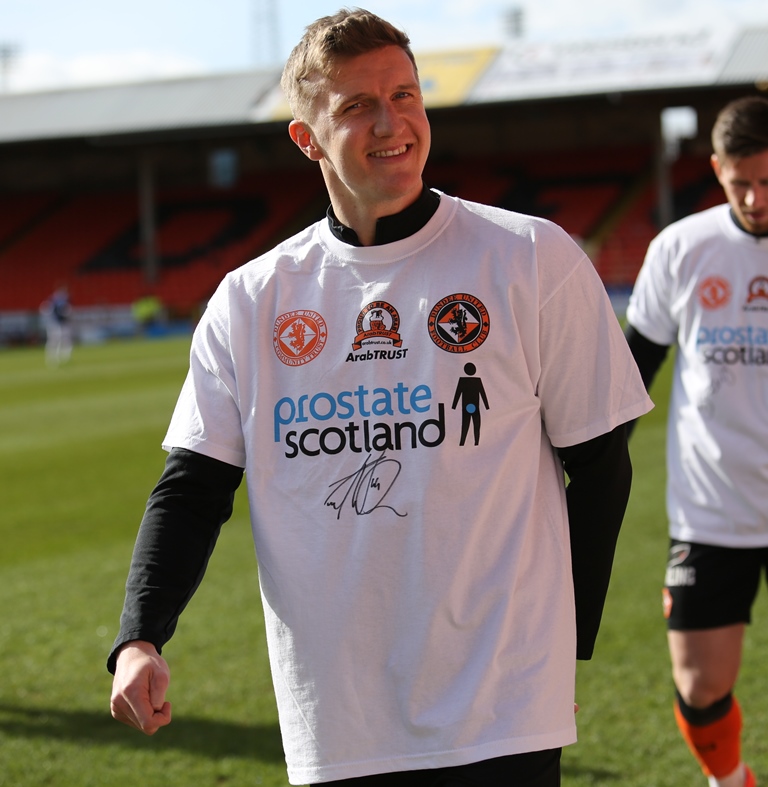 Dundee United Football Club extended another warm welcome to Prostate Scotland at Tannadice Park on Saturday for their second Prostate Awareness Day during their match against Alloa Athletic Football Club.

Dundee United players warmed up in bespoke t-shirts to symbolise the partnership between Prostate Scotland, DUCT (Dundee United Community Trust) and ArabTRUST, and the teams exchanged commemorative Prostate Scotland pennants.  Our discreet ‘Brief Guides to Prostate Disease and Prostate Cancer’ were distributed to supporters inside the stands, and posters were put up throughout the grounds.  Two prostate awareness stations were set up where supporters could take the opportunity pre-match and at half time to speak to Prostate Scotland and Clinical Nurse Specialists from Ninewells Hospital in Dundee.  Announcements were broadcast in the stadium highlighting the activities taking place.  Dundee United also published their own article and generously provided space for a Prostate Scotland advert in the match programme.

Dundee United Managing Director Mal Brannigan said: “Dundee United is delighted to be working with Prostate Scotland, DUCT (Dundee United Community Trust) and ArabTRUST to raise awareness about the most common cancer in men in Scotland. Thanks to tremendous advances in treatment, there are many men who would not be living as full a life as they are today and we all need to continue to support the results achieved from research.  Early detection and subsequent diagnosis is key and today is all about communicating those first symptoms to look out for.”

Community Trust Chairman David Dorward said: “Generally speaking, as men we are still not very good at looking after our own health and it is high time for an attitude change.  Tannadice brings together thousands of male supporters on a matchday and as such, it is the ideal place to start having the conversation we might otherwise choose to avoid.”

ArabTRUST Chairperson Susan Batten added: “ArabTRUST is proud to sponsor the T-shirts the United squad will be warming up in today and by doing so hopes to encourage supporters to use the opportunity to pick up information leaflets or speak with the specialist nurses in the lower tier concourses today.”

Prostate Scotland would like to thank sincerely the Directors, players, staff and fans of Dundee United; our volunteers, the ArabTRUST and DUCT for their enthusiasm and support.  We would also like to thank the ArabTRUST for sponsoring the t-shirts, and Alloa Athletic FC for their participation.

More information from Dundee United on the awareness day