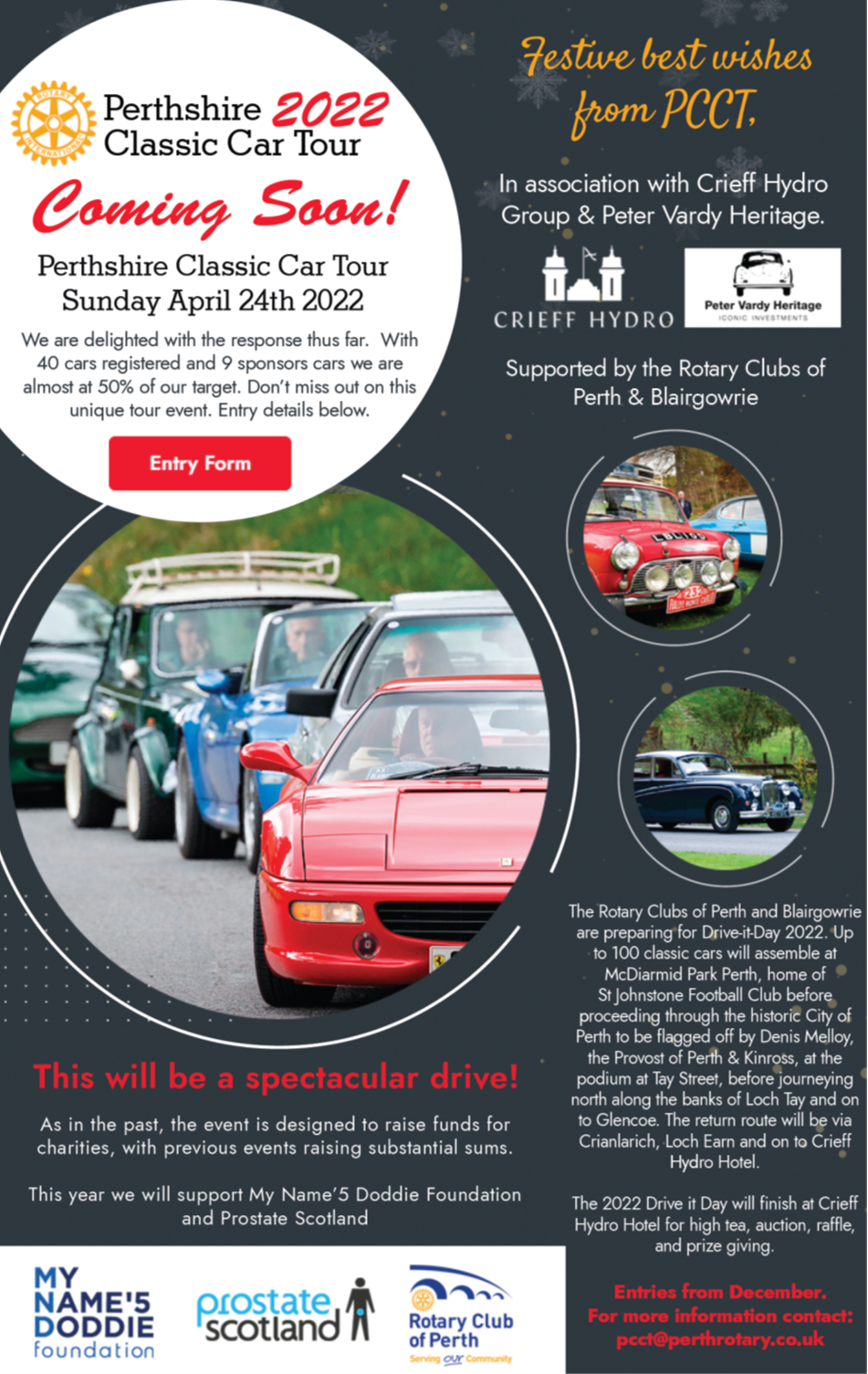 The Rotary Clubs of Perth and Blairgowrie are gearing up for their spectacular Perthshire Classic Car Tour on Sunday 24 April and we’re thrilled to be nominated as a beneficiary charity.

It’s a unique tour event, with 75 cars signed up to take part and generous sponsorship from local businesses.  Entrants can also join a celebratory gathering at the finish at Crieff Hydro Hotel.

There’s still time to sign up for this fantastic event!  Entries are open to drivers of vintage, historic and classic cars, including modern sports cars.

Up to 100 cars will assemble at McDiarmid Park in Perth, home of St Johnstone Football Club, before proceeding through the historic City of Perth.  Drivers will be flagged off by Denis Molloy, the Provost of Perth & Kinross at the podium at Tay Street, before journeying north along the banks of Loch Tay and on to Glencoe.  The return route will be via Crianlarich, Loch Earn and on to Crieff Hydro Hotel.

The tour will finish at Crieff Hydro Hotel for high tea, auction, raffle and prize giving.

The Rotary Club of Perth is one of 88 clubs in Rotary District 1010 – North Scotland and celebrated their centenary year in 2017.  Serving their community and financially supporting local charities has underpinned the Club since its incorporation.  Their main fundraiser, the Silent Auction, is a well established and popular event as are their other fund raising activities, with an annual golf competition and an annual Fayre held in Perth.

The Rotary Club of Blairgowrie is also part of Rotary District 1010 – and this year the members are celebrating the significant anniversary of 75 years of serving their community.  During the lockdown members have been donating the money they would have spent on meals at club meetings to the club’s coronavirus support fund.

Both Clubs support national and international charities and we’re delighted to be nominated as a beneficiary charity of their Perthshire Classic Car Tour alongside My Name’5 Doddie Foundation.

While there is no entry fee, entrants are asked to raise sponsorship or make a donation of at least £60.00 per car.  (This is payable to the Rotary Club of Perth Community Account). Entry includes a Tour Plate for each car, a Road Book and Map and Goody Bag.

What’s more, drivers have the opportunity to win some great prizes, including:

We’d like to say a very big thank you to the Rotary Clubs of Perth and Blairgowrie for their tremendous dedication and efforts in organising and hosting the Perthshire Classic Car Tour in aid of our work.  Our thanks also go to the several local businesses for their generosity in sponsoring this event.