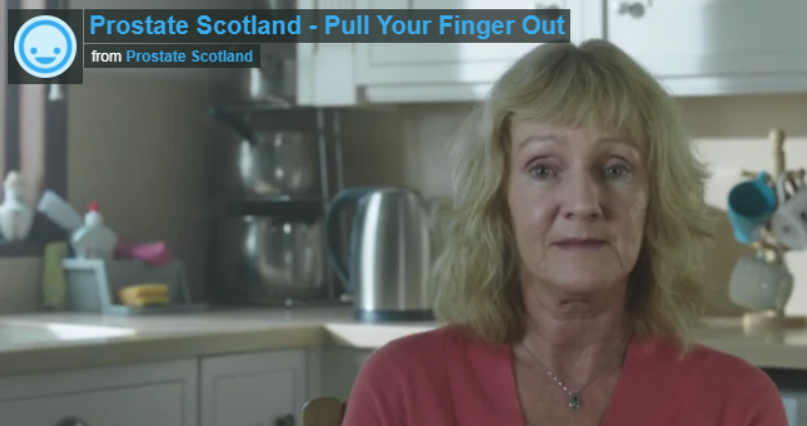 Greater awareness and earlier diagnosis can help save lives is the message of Prostate Scotland’s new prostate awareness initiative, which includes a new impactful TV and radio campaign. The ‘Pull Your Finger Out’ Initiative by Prostate Scotland aims to promote greater awareness of prostate cancer and disease and its symptoms. It also encourages more men who become aware of potential signs and symptoms to get these checked. The campaign includes a TV advert promoting greater awareness in order to encourage earlier diagnosis and thereby even greater survival from prostate cancer. The broadcast commercial will run in prime time and day time slots on STV in the run up to World Cancer Day on 4 February 2019. An awareness radio advert on radio on several local stations will run alongside the TV advert.

Prof Alan McNeill, Trustee of Prostate Scotland and Consultant Urological Surgeon said: “We are encouraging men if they have prostate symptoms to pull their fingers out and see their doctors. Earlier diagnosis and treatment improvements have dramatically improved survival rates – but greater awareness of the condition is required as the number of men likely to develop prostate cancer over the next few years is going to increase. Every now and again I meet men with prostate cancer who were unaware that their own risk was increased because their father or brother had had the disease. Sometimes this lack of awareness leads to them presenting late by which time we can’t offer curative treatment. Prostate cancer affects more men in Scotland than any other cancer, with one in ten men being at risk. ”

Adam Gaines, Director of Prostate Scotland said: “This initiative and TV and radio adverts are  about promoting greater awareness of prostate cancer and disease in Scotland, as too few men are aware of potential signs and symptoms. It is encouraging that survival from prostate cancer has doubled over the past 20 years, and we hope that the Pull Your Finger Out Initiative, the new TV and radio advertisements and awareness materials will further raise awareness of prostate cancer and disease and encourage more men where they have signs or symptoms to get these checked early.”

More information on the ‘Pull Your Finger Out’ initiative

The TV advert can be viewed here:

Notes to editors:
1. For media enquiries please contact Tim Dawson on 07984 165251 or info@prostatescotland.org.uk

3. The TV advert was directed by award winning Scottish director Ewan Stewart, acted by Carol Pyper Rafferty, and developed by the Union Advertising Agency for Prostate Scotland and produced by Mallinson Television Productions.